Microsoft is investigating. As of June 21 2017, we have a registry key to fix the iCloud issues. To correct other issues, you will need to uninstall the update

Is it dangerous to uninstall it? There is a risk, but for many people, the risk is very low. The exploit, like most, if not all Office exploits these past few years, will not run automatically – the user needs to be convinced to open the document and possibly, change security settings.

While all four versions of Outlook are affected by the bugs, Outlook 2007 and Outlook 2010 seem to have the most issues with this update.

The security update is targeting “specially crafted office documents” and part of the “specially crafted” applies to file names. Multiple dots and certain characters (including ?*<>|!) in a file name will trigger the Open or Save dialog, or in the case of attachments on Contacts, Tasks, Appointments, or in RTF formatted messages, a silly dialog stating that Outlook isn’t installed.

The program used to create this object is Outlook. The program is not installed on your computer. To edit this object, you must install a program that can open the object. 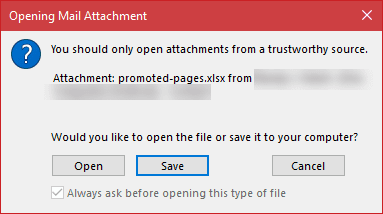 There is one (previously) known issue: if a message whose subject ends with a file extension that is on the unsafe extension list, the message will be blocked as an unsafe file type. You need to save the message to the hard drive and rename it, then attach.

The solution for this problem is at

How to fix the iCloud APLZOD.dll error in Outlook

iCloud had been working perfectly for years syncing with Outlook until yesterday. When I started getting this message: The set of folders cannot be opened. An unexpected error has occurred. MAPI was unable to load the information service C:\PROGRA~2\COMMON~1\Apple\INTERN~1\APLZOD.dll. Be sure the service is correctly installed and configured.

The usual fixes of signing out of iCloud and signing back in or reinstalling iCloud won’t fix this problem.

Add one of the following registry keys to allow iCloud to load.

Consumers and others not using group polices will use this key:

You will need to restart Outlook for the key to take affect.

Users are complaining about published custom forms too. VBScript and some controls are blocked.

The solution for this problem is at

I have a custom form that's published to my personal forms library that I use for new contacts. When I create a contact, I get the following message and the VBScript behind the form doesn’t run. If I uninstall the security update the problem goes away.
"To help prevent malicious code from running, one or more objects in this form were not loaded. For more information, contact your administrator."

As with the other problems, the short-term solution is to uninstall the security update.

I haven’t discovered any issues between the security update and BCM, however, an old issue with the Microsoft Chart controls is popping up again, most likely due to .NET framework updates.

Get the file at Microsoft Chart Controls for Microsoft .NET Framework 3.5

The KB articles related to the non-security updates released in June 2017 for Office 2013 and Office 2016 applications and available through the Download Center and Microsoft Update are available in the following article at Microsoft TechNet.
June 2017 Non-Security Office Update Release

These downloads are for organizations with "MSI" installations; these updates are installed automatically in Office 2675 subscription software.

Diane: thanks for the great Registry mod suggestion. Added your consumer route, however, did not have any effect on the problem. Still get the nasty "set of folders cannot ... " pop-up. Any other suggestions please?

Which version of outlook? If 2010 or newer, reinstall iCloud. It definitely should work with 2007.

How do I delete the folder for i cloud in outlook lastest version. Use windows 10 64 bit? I have delete the program under remove programs but I cannot get rid of the folder in my account in the email folder. I do not use the cloud. The email catpoop@cox.net works now that I corrected the profile. I do not receive email in my KirknDee@cox.net, default setting foe outlook. Thanks Kirk

Did you sign out of icloud or untick Sync calendar & contacts before removing icloud? That should have removed it... otherwise, go to File, Account Settings, Data Files tab and delete the icloud data file.

I have exactly the same problem. The appointments typed into Outlook sync with icloud.com and iPhone. The reverse does not work, ie. any amendments or new appointments in icould.com or iphone do not update into Outlook. Please help! This was working fine until last Friday....

Hmmm. If they are in icloud.com and sync up works, sync down should work too. The usual cause is the phone is using the wrong calendar as default, and nothing syncs to the icloud.com server, which means it won't sync to outlook.

I would try signing out of icloud in outlook and sign back in.

I deleted the .aplzod data file and then "repaired" iCloud for Windows (v7) and PRESTO!!

Let's hope it continues to work!

Thanks for the reply!

I made the Registry Change as recommended to allow my icloud.com contacts and calendar to be available on my Outlook 2010. Still no joy on access. I went to iCloud.com and unchecked and rechecked the link to contacts, calendars and tasks. Still no joy. What is the problem? What should I do next ?
Thanks, Jay

Sorry I missed this earlier. Is it still not working? The registry key isn't needed with 2010 (and may have been disabled in 2010 and newer by later updates). What has helped many people is reinstalling icloud.

Hi-- I have Office 365 on my macbook pro and have never been able to sync contacts, mail and calendar with iCloud. I read that there are communication issues with Office 365 and iCloud. Any ideas how I can get it to work? Thanks in advance.

Thanks for that advice. Has worked a treat.

Help. I am not computer literate at all but I found this site but I have no idea what to do with the registry key or how to install it. I have lost the
ability to synch icloud to my Outlook 2007. Can anyone help explain in simple answers. Sorry for being dim. lol

Either double click or Right click on this link http://www.slipstick.com/doit/AllowUnregisteredMapiServices.reg. If offered to run or save, you can choose Run, if not, you'll need to choose the option to save the file. This should save it with the file name AllowUnregisteredMapiServices.reg if you use IE or Chrome - if it is saved as a text file (.txt extension), you'll need to show file extensions in File Explorer and remove .txt from the name.
double click on the reg file to run it - you'll be asked to OK (or click Yes) 3 or 4 times.

I had this issue a few weeks ago on a Surface Tablet running Win 10 and Outlook 2013. I applied the fix but in the 15.0 key (theres nothing in the 12.0) and it appeared to work. WIn 10 has done another update and it looks like the issue has returned. Any information on this error with outlook 2013/Win 10?

when they released the june update, the key worked for all versions of outlook but was only intended for outlook 2007 - the later versions don't need it. For security reasons, the August update closed this security hole. If icloud is giving this error with outlook 2010 or newer, sign out of icloud, uninstall, reboot and reinstall icloud. That fixed it for others who had the error.