Office 2016 "RTM" was released to the public on September 22 2015. Office 365 Home, Personal, and University subscribers can download it now by logging into their account online and clicking Install, or wait until October 1 2015 for the automatic update. Office 2016 is expected to be released to Office 365 Business subscribers and volume licenses in February 2016. Office 365 First Release has access to it now. If you are on First Release, use the install link for the next version of Office. Anyone who used the Preview can leave it installed and will remain in the early release 'branch' (similar to Windows Insider program.)

Office 2016 Preview is now available to the public. The trial is the "click to run" subscription model, however Microsoft provided a key for those who aren't subscribed to Office365 software. 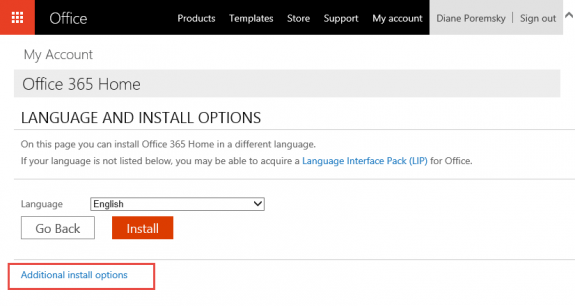 Office 365 Business subscribers (with a software subscription) can install it if their administrator enabled the First Release program. If so, install Office 2016 Preview from the My Software page (Gear icon, Office 365 Settings). Go to Try the next version of Office then click Install.

If you don't currently subscribe to Office 365, get the Preview trial key at //products.office.com/en-us/office-2016-preview.

Should you install it? While it's safe and very stable, I don't recommend installing it unless you are comfortable using Pre-Release software and are willing to possibly be inconvenienced. For example, don't install it if you are in the middle of writing your thesis.

Office 2016 Preview was released first to IT Pros and Developers. In order to use the beta you need a subscription to Office 2013/2013. Only the click to run version is supported at this time; an MSI version (for volume licensing) expected at a later date. A public preview for consumers will be released within a few weeks.

The most obvious change is the Colorful theme. 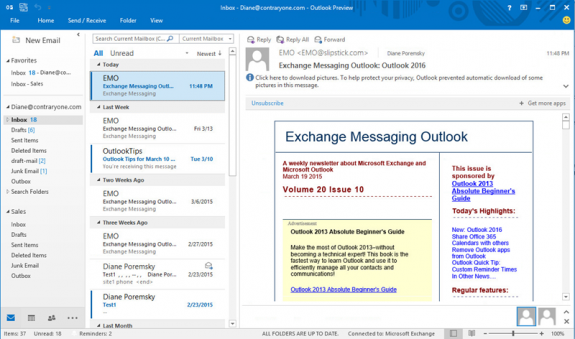 It’s not exactly what everybody who hates the whiteness of Office 2013 was asking for, but I like it. In the colorful theme, the title bar area is the color of the program icon – Outlook and Word are blue, Excel is green, etc. There is also a new darker gray theme. It's gray, it's darker. It's not the black many people hoped for. 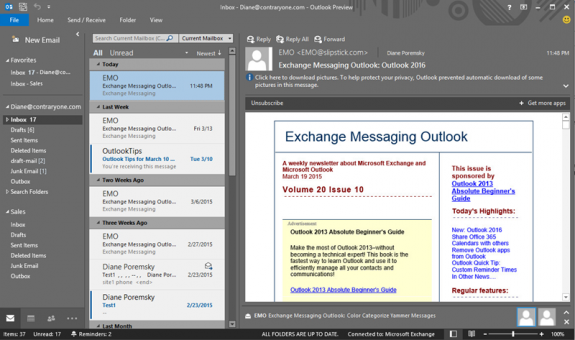 The next most obvious change is with attachment handling. Attachments on messages you receive are big buttons in the attachment line. Each button has a menu with attachment options: open, save, preview, delete. 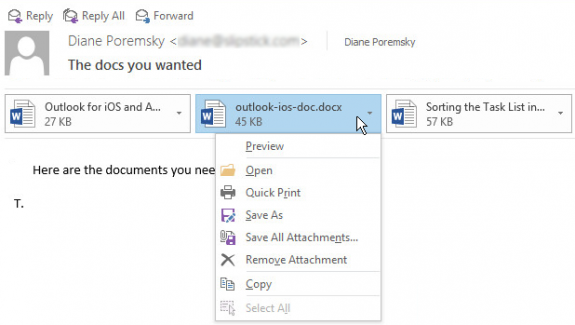 When you send a message and insert an attachment, the Insert menu lists the 12 most recent files you’ve worked with. 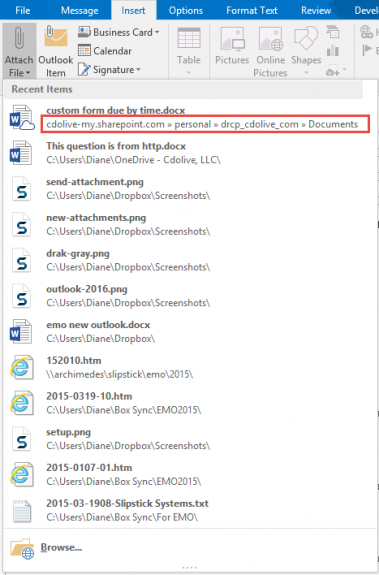 If the link you choose is stored online, you are offered the choice of Inserting links or a copy of the attachment. It needs a little (or a lot ) of work as it doesn’t offer to upload locally stored files to OneDrive or OneDrive for Business and add a link or use the link to files in the OneDrive sync folders. (The Insert Hyperlink function in all versions of Outlook works the same way, it's just not as "pretty".) 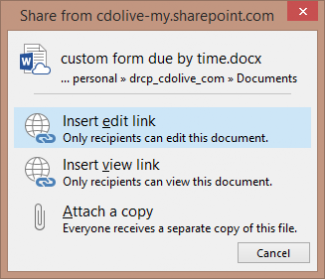 Outlook 2016 offers better small screen support in portrait mode. When Outlook is approximately 650 pixels wide, the folder list collapses. When a message is selected for reading, it covers the message list. It is great on 8” tablets but you don’t need a small tablet to try it out; just adjust the width of Outlook’s window to 650 pixels. One big change for some Exchange users is that Outlook 2016 only supports auto account setup for Exchange accounts; you can no longer create the account manually using the server names. If your organization doesn’t publish autodiscover information, you cannot create the account in Outlook.

Other things to look forward to in Outlook 2016: multifactor authentication support and improved search capabilities. On the junk mail filtering front, UK and EU TLDs were added to the Blocked Top-level Domain list.

Subscribe
154 Comments
newest
oldest most voted
Inline Feedbacks
View all comments
Anthony Walker (@guest_210227)
#210227
Update: it did work provided the destination folder is in the same tree as the account I am sending from. It did not work trying to file into shared folders. My bad, I forgot the registry key DelegateSentItemsStyle, it works fully now!!
0
0
Reply
Anthony Walker (@guest_210226)
#210226
No error messages - in fact, it works to the extent that it shows the folder picker, but it just doesn't file the emails into the selected folder, it leaves them in the default Sent Items folder.
0
0
Reply
Diane Poremsky (@diane-poremsky)
Author
#210225
Any error messages? Did you confirm macro security is set to low? Although I don't think I tested that macro, I haven't run into any macros that didn't work in 2016.
0
0
Reply
Anthony Walker (@guest_210224)
#210224
The VBA code for send-and-save (select a folder to save an outgoing message in) no longer works with Outlook 2016 Preview (neither does Tagwolf). Any ideas?
0
0
Reply
Clay sparkes (@guest_202427)
#202427

Hi, I have office 365 subscription with outlook 2016. I can't find any way of linking e-mails that I send or receive to their contact in my 'People'. Is this possible? I used to really like Business Contact Manager for Office 2003, but can't find how to replicate this great functionality.
Any suggestions greatly appreciated.
Thanks, Clay

No, not really. Activities was removed; the people pane/social connector will show a search box at the bottom of the contact with messages from that sender but it is disabled by default and will be removed from future versions.

I have a problem attaching documents in outlook 2016.
when I click insert attachment, recent used documents are showing.
is there any way to get rid of the dropdown suggested attachment?

Thanks you in advance

You can reduce the number of items in the list by editing the registry. See https://www.outlook-tips.net/tips/change-modern-attachments-listed/ for details.

Since upgrading a client to Outlook 2016 they have been unable to directly save attachments to their Sharepoint site. It's not the AV as that has been temp disabled. Drag and drop doesn't work either. Ok if you download to the PC and then upload. It's a real pain.

what version of sharepoint? Is it a synced library? I know they are making changes to the integration but thought it was all on the social connector side.

It's 365, not sure about the synced library bit though. It was all good until the upgrade last week.

Well, if it wasn't synced, you'd need to save to a URL. This is possible in word & excel but I don't recall it was an option in outlook.

Limit the number of appointments per day

Creating an AND rule in Outlook Rules

All subscribers are automatically entered in our drawing for a one year Office 365 Home subscription, with drawings at the end of the  'even' months. (Next drawings are at the end of February and April 2021.)