Just in case you missed the big news, Office 2016 for Mac (version is 15.11.2) was released to Office 365 subscribers. If you have a subscription for Office 365 software, you can download Office 2016 from account's download software page. The Public Preview will expire on August 9, as will the RTM installation for non-subscribers; the Enterprise volume licensing and retail perpetual licenses will be released within a few weeks.

My favorite new Outlook features are the ability to view calendars side by side or overlaid, just like on the windows version. 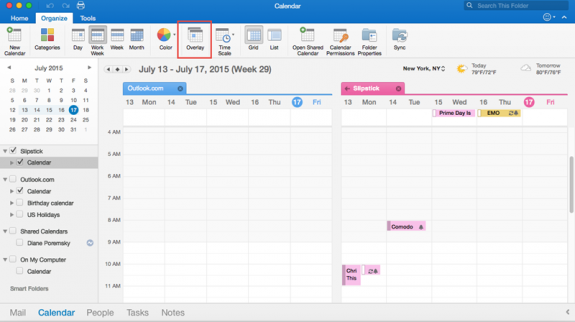 You can also propose new meeting times (if using Office 365 Exchange or the new Outlook.com).

Office for Mac looks like Office for Windows, but how similar are they under the hood? Closer than with older versions, but still far apart. Want to request Read receipts? Forget it. Voting buttons? Message Recall? Ok, message recall gets a pass since it doesn’t work all that well on Windows either. Mailtips and other informational messages such as mailbox quota? Nope. VBA? No.

See Compare Outlook 2016 for Mac with Outlook 2013 for Windows for a chart full of comparisons. Yes, there are a lot of No's on the Mac side, but they are making slow but sure progress.

Keyboard shortcuts for Outlook 2016 for Mac

Hello: I am very concerned with this comparison chart, which says Outlook for Mac 2016 does NOT support export into .pst file:

Does this mean I won’t ever be able to import my current Outlook 2016 files into a newer Outlook version in the future?

Mac Outlook can import windows Outlook pst files, but it cannot export to them.

I wouldn't say 'never' but yes, at this time (and for the foreseeable future), your options for exporting the data on a mac are limited. It's probably best to use a server side account like IMAP, Exchange, or Outlook.com.

Can this be done in this version of Outlook for Mac???

Thank you in advance for your help, Douglas

as far as I know, you can't use a single line view on the mac's outlook. The view options are pretty limited - you can turn off preview to reduce from 3 lines to 2 but can't drop to 1 line.

Hello - I just upgraded to Office 2016 on my business MacBook Pro. In Outlook, I'm seeing a change that hopefully can be fixed - when a colleague forwarded a message that I need to handle, I do not see the email address from the original sender. Is there a way to change this so I can see all the email addresses displayed? Thanks!

Is there any way to use the "cleanreminders" switch in Outlook 2016? I have several (old) reminders that will not go away. But I can't figure out what command I need to use in the terminal...

That switch is windows-only. Try turning off reminders, restarting outlook them turning reminders back on. This should clear all older reminders, even reminders you want (that are past due). Future reminders shouldn't be affected (but I'm traveling and don't have my mac along to double check.)

There seems to be an issue that many people are having with reminders coming from shared calendars. For example, if Bill accesses Sue's calendar through Outlook 2016, some of Sue's events (including events that Bill is not invited to) may show up in Bill's reminder list. Some of these reminders cannot be dismissed. It is possible to blow away Bill's profile and start from scratch with a new profile on the Mac/PC, but eventually, some events from Sue's calendar will start showing up and not be dismissible. Interestingly, these typically will be different events than the ones that got stuck in the first profile. There are a bunch of reports of this on the 'net, but no permanent, reliable solution as of this writing.

I would like to know if in Outllook 2016 for Mac I have the option of view selected dates only!
This option is available on Outllok 2013 for Windows - I can not fid a way to display selected dates on it.

No, it's not in current versions. Sorry.

Next to outlook.com contacts and calendar sync doesn't work I experienced that also Gmail contacts/calendar support is not taken care of in office365/outlook 2016.

Is there any sight when outlook.com is ging to be moved into the Exchange set-up in the 365 cloud env?

Yeah, outlook still doesn't sync with either gmail or iCloud calendar and contacts.

Last I heard, they are still planning on having all accounts moved to office 365 by the end of the year.

I just installed office for mac 2016 and find the calendars and contacts don't sync because the outlook.com account can only be accessed via IMAP. Do you have any update from MS on when accounts will be moved to the office 365 version?

By late spring. You can request it now (although no promises)
https://www.microsoft.com/en-us/outlookpreview/default.aspx

Creating an AND rule in Outlook Rules

All subscribers are automatically entered in our drawing for a one year Office 365 Home subscription, with drawings at the end of the  'even' months. (Next drawings are at the end of February and April 2021.)