The Exchange Public Folder Administrator role is added in Exchange 2007 sp1. After installing Exchange 2007, administrator roles can be assigned to users or groups. In the Exchange Management Console (EMC), navigate to the Organization Configuration container. Select ‘Add Exchange Administrator’ from the Right Click context menu or the Action Pane in the EMC. This will launch a very simple screen shown in Figure 1. 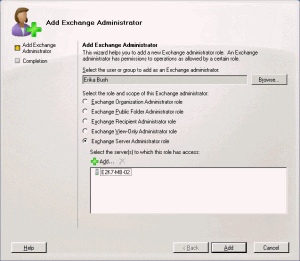 When Exchange is installed, it adds a container in Active Directory called Microsoft Exchange Security Groups. Membership in these groups forms the roles assigned through Exchange 2007.

Assigning Exchange administrator roles can also be done using the Exchange Management Shell. Of course, everything you can do in the EMC you can accomplish using PowerShell cmdlets. Adding an Exchange Administrator role is done as follows:

The different roles for this cmdlet are listed as OrgAdmin, ServerAdmin, RecipientAdmin, ViewOnlyAdmin, and PublicFolderAdmin. Again, the latter is added with Exchange 2007 sp1. The ServerAdmin role requires assigning the -scope parameter as well defining the server for the role.

As the name suggests, this role is assigned for administrators to manage Exchange recipients. They have read access to the Domain Users container in AD with write access to Exchange attributes. This requires setup with the PrepareDomain switch in every domain where Exchange users exist.

This role allows read access only to Exchange organization container and containers with Exchange recipients in AD. They can verify settings, but can not change or add any settings.

Added with Exchange 2007 service pack 1, the name basically says it all. This role allows delegation of administration of public folders without allowing any other Exchange administration permissions. Basic Public Folder control is granted such as creating and deleting public folders and controlling folder attributes, like quotas and access.

If you would like to submit guest articles to Slipstick.com, please contact us through our Feedback form. Please note: article suggestions that are not specifically about Outlook and/or Exchange Server will not be acknowledged.