In Exchange 2000 Server and Exchange Server 2003 it was challenging to manipulate e-mail messages as they were routed through the organization or as they passed through the gateway to and from the internet. In those versions, SMTP was managed by an extended implementation of IIS SMTP.

Controlling SMTP messages in simple ways, such as archiving, appending a disclaimer or implementing a catch-all mailbox, required coding (or borrowing code) SMTP Transport event sinks and registering them on the appropriate servers. While some functionality could be attained with VBScript, many sinks required Visual Basic, C# or C++ to meet the goals of the administrator. Exchange 2007 reverts to a proprietary SMTP implementation that exposes some basic message control during routing using a mechanism called Exchange 2007 Message Transport Rules. 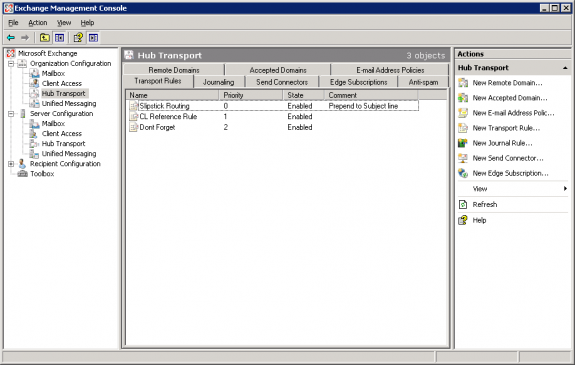 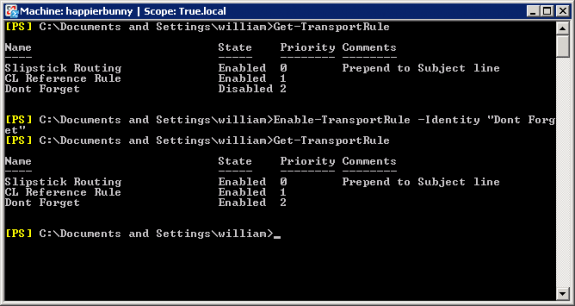 Creating a rule through the EMC is very simple. Like the Outlook Rules Wizard, message Transport Rules follow a logical creation path. If certain conditions are present in the message, then perform specific actions unless certain exceptions apply. Figure 3 shows an example of subject line manipulation based on a sender domain. 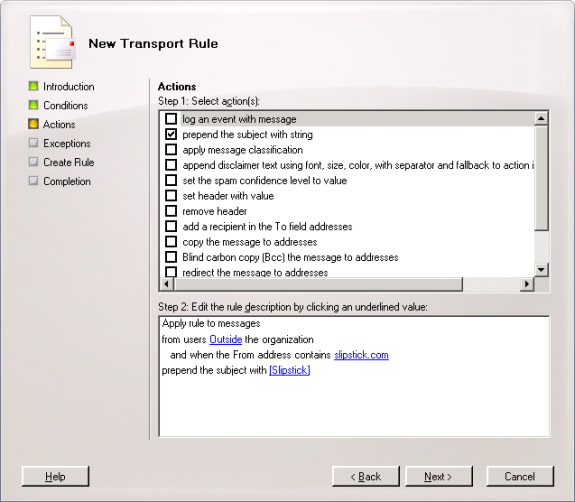 Exchange Management Shell also has many Cmdlets for administering Transport Rules. The "action" portion of the commands are self-explanatory:

Rules can be based on a number of items, including internal versus external messages, header items, message body content, and sender or recipient information. The Hub Transport Rulesets are very valuable for compliance. All messages must go through a hub transport server, and therefore all messages can have rules applied to them. As such, administrators can maintain solid control of messages for archiving or establishing ethical walls internally (for example, the accounting personnel may be prohibited from emailing the plant workers or vice versa). There is a limit of 1000 Transport Rules in an Exchange organization; however, this limitation is simply the threshold Microsoft tested up to and therefore supports.

Message Transport Rules are one of the most relevant areas of improvement for Exchange Server 2007. Tasks that were daunting in previous versions, yet menial in competing products, now have a quality solution with multiple interfaces and granular control.

If you would like to submit guest articles to Slipstick.com, please contact us through our Feedback form. Please note: article suggestions that are not specifically about Outlook and/or Exchange Server will not be acknowledged.