Since the first release of Outlook, Microsoft has released many updates and service packs.

The following list is an overview of the available public Microsoft Outlook builds. The list also includes useful information which should help an administrator to determine the build info of a client that is logged-on to the Microsoft Exchange Server.

With the release of Office 2016 and four different branches on four different release schedules, having an older version number doesn't necessarily mean your Office isn't updated. It can be up to four months before everyone reaches a milestone. Office 365 client update branch releases contains the a list of updates for the different branches.

To check the Outlook build number in Outlook 2013 and newer, click on the File tab, then Office Account. Click About Outlook to see the full-sized About Microsoft Outlook dialog. 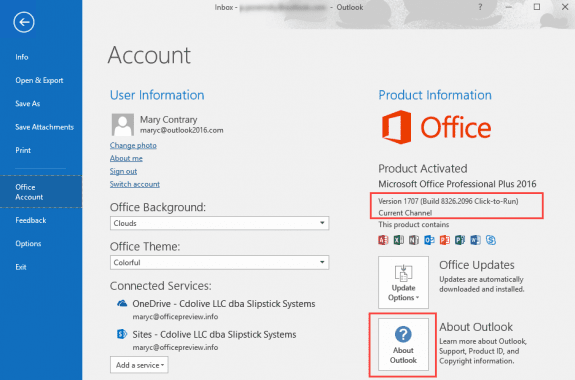 In plain English, the typical Office 365 Consumer is in the First Release, while small business subscribers are in Current Branch. In many cases, the time difference between updates released to First Release and Current Branch will be measured in days. If you joined the Insider program, you'll get updates more often.

Trying to keep up with the version numbers is a nightmare and hopefully Microsoft will keep their lists updated.

List of all updates for Office 2016 subscription, by year, month, and application. Although the article is targeted to business subscriptions, it applies to consumer subscriptions too. Office 365 client update branch releases

Office 365 subscribers will be automatically upgraded to the next version of Office. (The upgrade can be delayed for up to one year.)

Outlook 2007 is Version 12.0. Beginning with Outlook 2007, the versions reported in Outlook and in the Exchange administrator are identical.

The following are the "end of life" dates for the different Outlook versions.

Note that End of Life means Microsoft will not support it, nor will they release updates for it. Office will continue to work on supported versions of Windows.

Does anyone know how to identify the Outlook build number programmatically, like with Powershell, C# etc? I need to determine what version my network users are on and searches through the registry and file system are fruitless.

I believe the registry only has the major build - if you want the full value, Version 2007 (Build 13020.20004 Click-to-Run), you need to get FileVersionInfo. from outlook.

This has a C# example
https://www.kunal-chowdhury.com/2016/06/how-to-retrieve-office-version.html

Thanks. You answered a lingering question of mine I'd tried twice to get resolved from Microsoft tech support. I do indeed have the final RTM version of office 2016 installed and activated. I'd been afraid I'd activated a preview version when I saw vl rtm's circulating. The higher build number and all.

can I have outlook 10 and Visioneer 12 shake hand How?

Do you get any error messages?