I've received quite a few questions over the last couple of weeks asking how to stop Outlook from running when the computer is rebooted.

Outlook has recently started opening when the computer boots. I looked in the startup menu and task manager and Outlook is not listed anywhere. I don't want it to automatically open. How do I stop it?

While the usual place to look is in the startup menu, you probably won't find an Outlook shortcut there. It could be caused by one of two things, neither of which is obvious or in the start up menu, task manager, or msconfig.

If you use Windows 10, you may be the victim of a Windows "feature" to reload any program that was running when Windows shut down. While this feature is nice when Windows reboots to install updates, it's annoying when it does it after every reboot.

Until Microsoft adds an option to not reopen the programs that were running when it shut down, you'll need to close the Outlook and other programs before shutting down the computer or rebooting.

When it is fixed, it will be controlled by the option in Settings > Accounts > Sign-in Options to finish setting up apps after logging in. While this option is in older builds, it apparently is not working in older builds. Slide it to Off to keep Outlook and other apps from reloading when Windows boots. 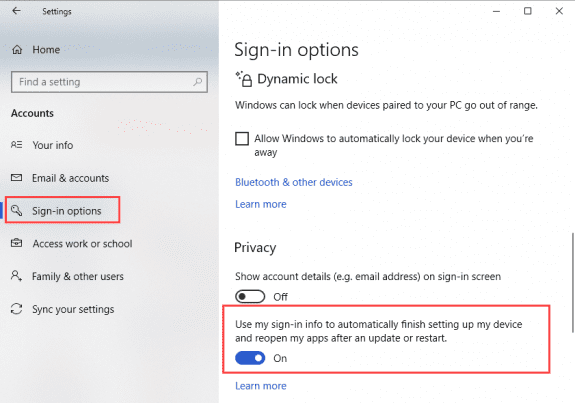 You can use a workaround until Microsoft fixes it in a future version. Right-click your Desktop, choose New, Shortcut. Use this command as the target: %WINDIR%\system32\shutdown.exe /s /hybrid /t 0.

If the cause is another program accessing Outlook data, you'll need to check the programs that load at startup. Sync utilities that sync Outlook data to other computers or with your smartphone would be the most likely suspects, but any application that accesses Outlook data could be responsible.

Outlook automatically opens when the computer boots was last modified: May 22nd, 2018 by Diane Poremsky

Hi, I have a computer that requires an outlook login email address and password before the computer loads the home screen. However, the outlook email address that is listed there is incorrect so the password which I would use does not match. Is there a way for me to bypass this outlook login?

To confirm: the problem is with the computer logon, not in access the email account directly? You would need to reinstall Windows. If you are using a pin, that can get you in, but to do anything you need to know the password or need to be able to reset it from another computer.

The only way to do that is if you use Exchange server mailbox and use online mode. Better to lock your desktop and everyone has their own logins.

THANK YOU! This answer was nowhere else I could find!

Problem solved after have tried many other proposals: in my case the only I needed to preform is to kill Outlook task before shutting down the computer. However, a little strange for me that this is not automatically shown in the startup tab of the task manager...

PROBLEM SOLVED. HERE IS THE SOLUTION. I had MS Word, MS Excel and Google Chrome startup automatically every time I booted my machine.

What worked for me was to delete all the string entries under the following location on RegEdit:

so just check these locations and delete everything suspicious under