We recently started to see problems that are solved by uninstalling the July 13 2010 update, which also included the April 27 2010 hotfix along with the security fixes. Apparently very few people installed the hotfix - we saw no complaints until late July.

The April update introduced line wrap to printed Monthly calendars, as seen in older versions of Outlook. Unfortunately, the algorithm that did the wrapping didn't do a very good job and new lines begin in the middle of words. Oops. The end date was also removed. We've had a lot of complaint about the lack of line wrapping since the release of Outlook 2007, now they're complaining about the lack of the end times. These issues are scheduled to be addressed in updates later this year.

Another problem that goes away when the update is uninstalled is "now you see them, now you don't" Color categories. One of the affected users described it like this:

I noticed that when I open Outlook 2007, often times (but not all the time), my categories are reset to the default basic colors. If I close Outlook and re-open it, they usually all come back! When "missing", the names of the categories will show up with gray background in appointments or contacts instead of whatever color they should be. When "categories" list is viewed, none of these categories show up at all.

We also saw a couple of problems with recurring appointments that were solved by removing this update, including one where the attachment wouldn't open.

If you notice any other weird or buggy behavior, try uninstalling the update. 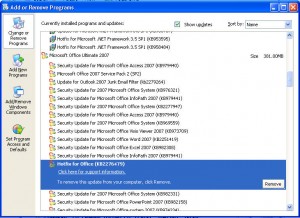 Uninstall these updates to restore the missing end time. 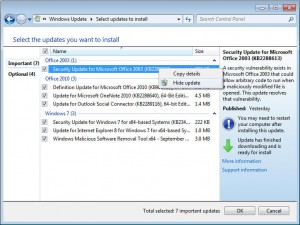 After you uninstall the problematic updates, Automatic updates will keep reinstalling the Update. You need to go to the update site and hide this update.

While the update is a "critical security update", the exploit it addresses is only triggered by a user opening an attachment that arrives in an email message. Consider how likely someone would open an unknown attachment on the computer when deciding whether you can go without it until the issue that bugs you is fixed.

While the update is a "critical security update", the exploit it addresses is only triggered by a user opening an attachment that arrives in an email message. Consider how likely someone would open an unknown attachment on the computer when deciding whether you can go without it until the issue that bugs you is fixed.

This hotfix fixes word wrapping in calendar print outs which was broken by the July security update. Note that this update does not restore the end times to the print out, that is expected to be fixed in a future hotfix.

Other issues addressed by the August hotfix for Outlook 2007 include fixes for the following issues:

Hotfixes for the other Office applications are linked at
Office 2007 Cumulative Update for August 2010
https://support.microsoft.com/kb/2396342