Some BCM user's, including myself, have a problem installing Business Contact Manager.

Once the I have agreed to the license agreement the files start to extract. The window title says Business Contact Manager Installation. Then I get a new window that says "Welcome to [another program] Setup Wizard".

This is caused by a bug in the installer. I had the problem too, with a different program. I was lucky, BCM couldn't install it because setup.exe needed to contact a now-defunct webserver for updated files and threw up an error.

What really happened is that the Windows Installer tried to run a file named setup.exe that is in the same folder as the BCM download, instead of the setup.exe in the extracted BCM folder in %temp%.

You have two options - find and rename (or delete) the file named setup.exe that is in the same location (usually Downloads) as the BCM installation file. This is obviously the easiest way to fix the error. Deleting setup.exe from your downloads directory would be the best solution if you don't want the other program installed, ever.

I downloaded BCM from the Microsoft site. Now I have 20 Virus on my system. It started the BCM Setup. I had to confirm the Microsoft license and the it wanted to install FLVM Player!!

The alternate method is to let BCM extract the files, then stop the installation and find the real BCM setup.exe in the temp folder and run it. Type %temp% in the address bar of Windows Explorer then press enter. Location the BCM Setup folder and run the setup.exe that is inside it. (Here, it's C:\Users\Diane\AppData\Local\Temp\BcmSetup.en-US) 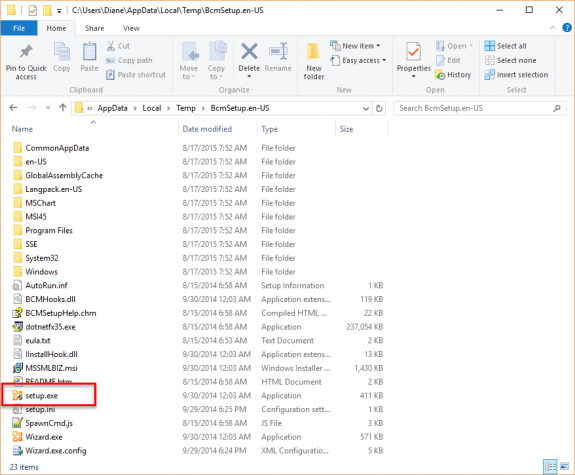 Other application installations may be affected by this same bug but the solution is the same for all - delete or rename the other setup.exe.