An administrator had a question about disabling ribbon and toolbar buttons:

How can I disable the function "Edit Message" under Message, Actions, Other Actions?

You can disable commands using group policy or by editing the registry.

Group Policy is not limited to use by network administrators. Anyone can use it.

The policy key that is used to lock out ribbon and toolbar buttons is stored in the registry at HKEY_CURRENT_USER\Software\Policies\Microsoft\office\xx.0\outlook\disabledcmdbaritemslist

The Control ID value is stored in TCIDn String values, where n is the order in which the command was entered. 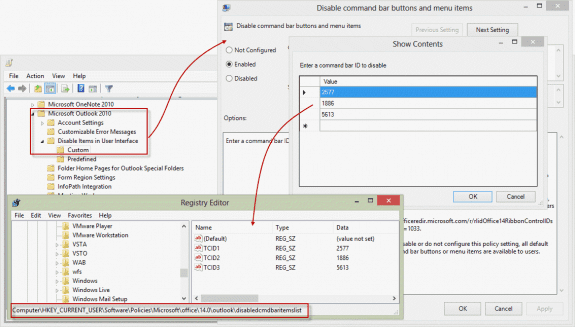 The specific key to disable Outlook 2016's Edit Message is (when it's the first command disabled):

Do It For Me

If you don't want to edit the registry, I have a ready-to-use registry file you can download and run. Right click on the link and choose Save target as (IE) or Save Link As (Firefox). Double click to run it and add the values to the registry.

Below is a list of commonly disabled features or Control IDs I've previously looked up for one reason or another.

In many cases the Control ID applies to all methods of accessing the command. For example, disabling Import/Export on Outlook's File, Open menu also disables it in File, Options, Advanced. Keyboard shortcuts will usually still work; e.g. disabling the Delete button on the ribbon and right click menu does not block the Delete key.

Unless otherwise stated, the following commands work on Outlook 2013/2016 and up. They may work with older versions when the same command exists.

If you don't know the command's Control Name, filter for the Group name in the Group/Context Menu Name column of the Control spreadsheets.

The following Command IDs remove the accept as tentative options and Do not send a response from meeting requests.

Use Group Policy to enforce Office 2010 settings
Office 2010 Help Files: Office Fluent User Interface Control Identifiers
Outlook 98 Command bar controls list This list is old, but the IDs don't usually change between versions. In most cases, the Control ID is the same across all versions of Outlook.

Hello!
I am looking for the ID to disable the "Office Theme" General Option in Outlook 2016.

The background control can be removed using group policy too - it sets this key:
[HKEY_CURRENT_USER\SOFTWARE\Policies\Microsoft\office\16.0\common\general]
"disablebackgrounds"=dword:00000001

On second thought... I forgot to check the options settings. :( Those values remove it from the backstage (file > account) but not from the options dialog. The policy removes the background control from options but not the theme.

I don't see a policy to remove the theme control.

do this for teams

What commands do you want to disable in Teams?

Hi Diane, I've been searching for a way to disable the Import/Export button or disable the ability to create PSTs. I've tried to create the registry key you described in your article but I can't get the Import button to be disabled. I'm using Outlook 365. Any ideas why this wouldn't work?

Restart Outlook after setting the keys.

Both are registry settings :), but GPO is centrally managed, which makes it easier to apply changes to all users. Or use a logon script to load the reg file.

I guess what I meant is out of the 2 options presented above in your article where both can be deployed via GPO, which approach would be the best practice?
Thank you.

GPO is always best practice, if you are using GPOs within your company. Not all companies do, especially smaller organizations.

Do you have a command ID or suggestion to disable additional mailboxes? Want to disable this to stop bad habits within our environment, but doesn't appear to be in your spreadsheet.
"More Settings < Advanced "- want to disabled functionality on open these additional mailboxes. Only option I want users to have functional is "Add Account" via the File menu. This is Office365 desktop client.

Damn, thanks for looking! Can't say I've found a way either.

Hi Diane ,
I need to disable Manage Mobile Notifications from outlook backstage info menu , i tried using tcid value but this is not working.

Which settings enables this button , can you help me ?

i don't see a way to disable just that option. The value the spreadsheet is not working for me either.

Hy I want to to disable quick print from menu in the outlook 2013 but registry key or policy is complete ignored. If I search internet is not possible to remove quick print from outlook menu.
I have chose ID 2521. If somebody done this please share how?

Did you put it in HKEY_CURRENT_USER\Software\Policies\Microsoft\Office\15.0\Outlook\DisabledCmdBarItemsList ?
Restart Outlook?

Which suite do you use? Some policy keys won't work with the versions intended for Home use.

Hi...is there any option to enable recover deleted items in outlook 2018..I have checked folder menu but it isn't there..Kindly help if it is possible

All subscribers are automatically entered in our drawing for a one year Office 365 Home subscription, with drawings every other month. (Next drawings are October 29 and December 10, 2020.)