› Outlook › Macro to automate the Move to Folder command

An Outlook user had a problem: delegates drafted messages for their managers and needed to save them in the manager's Drafts folder.

If the delegate creates a Draft email (not sent yet) and wants to save it in the manager's Draft folder, there is no easy way to do that. It automatically saves in the Delegate's Drafts folder by default. We tried moving it from the delegate's folder to the manager's folder, but then the manager does not have access to edit it. So we had to copy it, and then delete the copy from the Delegate's folder. This is crazy as it involved many more steps and is not efficient. 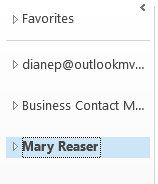 To use this macro, paste it into a module in the VB Editor then change the Destination folder name. Use the mailbox or data file name as it appears in your folder list; Exchange server mailboxes will use the display name as seen in the GAL.

Open a new message form and customize the ribbon or QAT by creating a button for the macro.

Create a draft message then click the button to move it to another folder.

Move to a folder macro

You can use this macro with other Outlook item types by changing the objItem and folder names. For example, I want to save contacts in my Sharepoint list, so I changed three lines to the following:

To use the currently selected folder as the source folder, use
Set objSourceFolder = objNamespace.ActiveExplorer.CurrentFolder

Please note, the user needs to have at least Create permission on the folder they are moving the item to. If the folder is in another person's mailbox, the folder (or the mailbox) needs to be open in Outlook as a shared folder or mailbox. 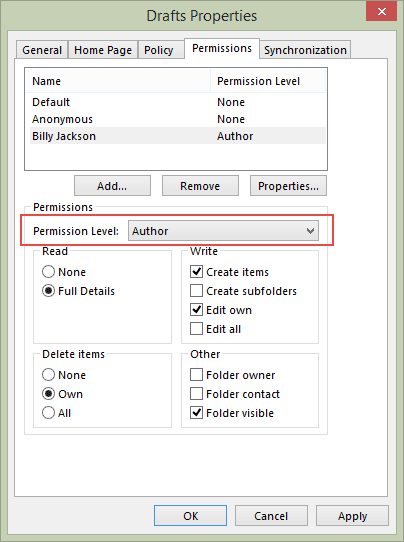 How to use macros

First: You will need macro security set to low during testing.

To check your macro security in Outlook 2010 or 2013, go to File, Options, Trust Center and open Trust Center Settings, and change the Macro Settings. In Outlook 2007 and older, it’s at Tools, Macro Security.

After you test the macro and see that it works, you can either leave macro security set to low or sign the macro.

Open the VBA Editor by pressing Alt+F11 on your keyboard.

To put the code in a module:

Macro to automate the Move to Folder command was last modified: May 2nd, 2016 by Diane Poremsky

I Want my reply all messages i.e same subject , to move to a other folder keeping just the latest one in my inbox. And i want all mail no deletions. Can u suggest ways for this

The macro at https://www.slipstick.com/developer/delete-older-messages-new-message-arrives/ could be tweaked to move messages ot a new folder rather than delete them.

I'm trying to modify this macro so that I can take the currently selected folder (which may not have any items in it) and move the entire folder into another. I keep getting "Object doesn't support this property or method" at this line

I was able to get a similar macro to work using this:

But would like to avoid having to go through a dialog box to pick the folder when I already have the folder selected in Outlook.

Would appreciate any help!

So you want to move the folder itself, not a message? I’ll take a look.

hI, i love this macro and the tutorials you put out.
is there a way to modify this so that it moves folders in a different invox that is not the default inbox (i have more than one inbox in my outlook to manage)?

Sorry I missed this earlier. Moving to another mailbox requires identifying the folder... this page has some information - https://www.slipstick.com/developer/working-vba-nondefault-outlook-folders/ - you'll need to use getfolderpath function or the method to use a shared folder in Set objDestFolder =.

For example, i have two accounts in my profile (listed in file, account settings) and would use this to move it into a folder in the second mailbox: Set objDestFolder = GetFolderPath("alias@outlook.com\Test")

hi! this is very handy. I want to be able to move (not copy) a message to a task. I tried to use this macro, replacing destination with "Tasks" folder but I got the message it is not supported. Any ideas?

There exists a third-party tool that solves this problem:
https://ivasoft.com/cooldraft.shtml

I'm an Outlook 2013 user but spend a fare amount of time with Outlook for Mac for one and only one feature; Message\Move\Choose Folder and its shortcut key. My work requires me to use hundreds of Outlook folder. The time saved by being able to select a message in the Inbox, hit Shift-Command-M, and start typing the folder name is immense.

Is there way to replicate this function in Outlook 2013?

Outlook 2013's shortcut is Ctrl+Shift+V - you can only type the first letter of a folder to jump to it, not the folder name. Plus, you could use Quick Steps to move messages.

Hi, can you plz help.

the for atmt is running only 3 time and exits,

What macro are you using?