We get questions like this after users upgrade Outlook:

Outlook 2010 is working fine, but there is some confusion about the auto-complete list and the Suggested Contacts feature. 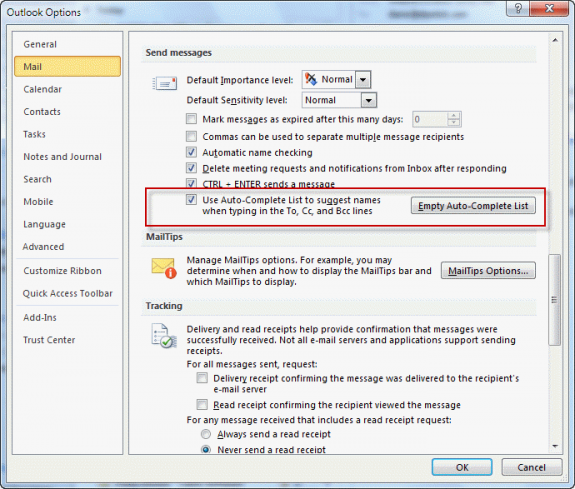 If you prefer using a command line, switch, it's CleanAutoCompleteCache.
To use, close Outlook and in the Start menu, Search field or Run command (Windows key + R to open) type or paste the following line and press Enter to run

Clearing the auto-complete list only removes the addresses you see as you type in the To, CC, or BCC fields. It will not remove contacts stored in your data file in the Suggested Contacts folder (see next section.)

To disable the autocomplete list by editing the registry, you need to set the ShowAutoSug data value to 0. Administrators can disable it for all users using GPO.

To disable autocomplete using GPO, use a logon script to set this value:

To use with other versions of Outlook that support auto-complete, change 14 in the path to the correct version number for your version of Outlook.

Suggested contacts is a "one-hit wonder" feature available only in Outlook 2010 that creates contacts for addresses you send mail to when the address is not already in your address books.

While it was a much requested featured over the years, Suggested Contacts was not popular and was removed from Outlook 2013.

Suggested Contacts solves both problems easily: by using a separate Contacts folder, the "good contacts" folder is not polluted with useless contacts and you don't need to remember to create contacts or worry about losing the auto-complete list.

When Suggested Contacts are disabled, the CreateContactsForOneOffs data value is set to 0 in the registry:

To disable autocomplete using GPO, use a logon script to set this value:

This method works in all versions of Outlook that use autocomplete.

When Outlook 2010 doesn't save addresses to the autocomplete list, first try clearing the cache file, either with the button in File, Options, Mail or by starting Outlook with the /CleanAutoCompleteCache switch mentioned previously.

In most cases, this will fix the problem. If the problem persists, you'll need to delete or rename the RoamCache folder found at C:\Users\[username]\AppData\Local\Microsoft\Outlook\RoamCache (Windows 7/Vista). In most cases, this brute force method is not needed and simply clearing the cache and letting Outlook rebuild it will work.

Close Outlook. In the Start menu's Search field or in the Address bar of Windows Explorer, type or paste the following command to open Windows Explorer to the Appdata local folder.

Delete or rename the RoamCache folder then restart Outlook.

Users with Exchange mailboxes should switch to online mode before deleting the roamcache folder then re-enable cached mode after starting Outlook. This ensures the cache is cleared from the mailbox as well as the local ost. To turn off cached mode and enter online mode, go to File, Account Settings, double click on the Exchange account and clear the Use cached mode checkbox. Click Next and close the dialog then close Outlook. Repeat these steps to re-enable it after deleting the RoamCache folder and restarting Outlook.

Contacts are not added to the auto-complete list until you send an email - importing the NK2 will not create contacts in Suggested Contacts.

New Contacts should only be created in Suggested Contacts if the address is not in your other Contact folders, but in my experience Outlook sometimes has a problem deciding if a contact exists so you can expect a few duplicates in the Suggested Contacts folder.

Any contacts you need to save can be moved to your Contact folder and you can stop the creation of suggested contacts by changing the setting in File, Options, Contacts.

Import or copy the Auto-Complete List to another computer

Suggested Contacts and Auto-Complete Lists was last modified: May 1st, 2019 by Diane Poremsky

Hello
I have searched for hours for a solution for this. Move or import the "auto complete" to Outlook 2016. I had Outlook 2010(32bit) on my laptop(win 8.1) with a working Autocomplete. Now I have a new PC with Outlook 2016(64bit) on Win 10. Sadly it had no autocomplete. Tried n2kEdit without success.

It worked perfectly and I'm over the moon.

Have "emptied" auto complete in Options with an Office 365 tech watching. Can't get rid of it.

It does work for 2016. The bigger question is where is the name coming form (assuming the name and address used to be correct) - if it doesn't exist in contacts and you dont reply to messages... or do you mean the name and address are mismatched - like john smith is showing in autocomplete with someone else's address?

Microsoft Outlook allows you to delete single entries only in autocomplete addresses, not in suggested contacts.

However, OWA (Outlook Web Access) will allow you to delete a single entry in autocomplete contacts and in suggested contacts as well.

Pay attention to the fact that you need to wait up to 12 hours in order to see the changes syched from the web interface to Microsoft Outlook.

You can totally disable suggested contacts by editing the register, but if you just want to delete some entries than I really suggest you to try this solution.

This solved the problem in my occasion.

You have the new autocorrect list by the sounds of it - where the name and address are on separate lines. For now at least, you're stuck with it. :(

You can vote for the old format here - https://outlook.uservoice.com/forums/322590-outlook-2016-for-windows/suggestions/20551399-please-revert-or-give-the-option-to-revert-the-c

The utility from nirsoft will work with 2016 and windows 10.

Hello, i am having some difficulty trying to access my autocomplete list to use to do email marketing. i want to be able to copy the email addresses and put them on a list. can you help me?

if the addresses are not in the contacts, you'll need to use a utility to get the addresses out of the autocomplete list. This is the utility I like: https://www.nirsoft.net/utils/outlook_nk2_edit.html

I have a situation where several family members have their email accounts setup up on a single Outlook 2013 program on a family PC.
Some of the family members also have their emails on Outlook 2013 on 'other' PC's also.
When composing an email on their 'other' PC the Auto-Complete will suggest names from everyone's (on the family PC) Auto-Complete list not just their own.
Is there any way to prevent this happening so that each email only gets to access its own Auto-Complete list?

What type of email accounts are they? (Pop, imap, exchange/outlook.com) The list is stored in the data file, so I can understand some bleed if outlook.com, but not with imap or pop.

I'm having trouble to have autocomplete to show my groups. I did new contact groups on my people tab and it doesn't show up. I'm using Outlook 2016 from Office 365 plan my employer provides

This is a known issue with a recent office build. Microsoft is working on a fix, but no ETA at this time.

Thanks for the information. Found out a powershell script could downgrade outlook version to the one that had autocomplete for the groups. So outlook was downgraded to v1708