› BCM › Can you use BCM Contacts in Outlook Web Access?

Recently, a BCM user asked how they could access their BCM contacts from the Outlook Web App (OWA).

Why can I access my public folders over Outlook Web App but not my BCM contacts?

Public folders are stored on the Exchange Server and BCM contacts are stored in a SQL server database in your local network. The only way to get BCM contacts into an Exchange mailbox is by setting up Sync between BCM and Outlook, which copies copy the contacts to a contacts folder in your mailbox. I highly recommend using a separate folder for the BCM contacts, not the default Contacts folder so it won't "pollute" your personal contacts. Plus many smartphones will let you configure which folders to sync, helpful if you don't want the BCM contacts synced to your phone.

The issue I have with syncing to each persons Outlook contacts is that BCM contains close to 20,000 contacts. If I were to enable that for all 25 users, wouldn't that put a stress on the infrastructure because of all the syncing let alone duplicating all of those contacts would increase the Exchange database size?

The stress would be on the local computer and bandwidth, as you'd be syncing from BCM to Outlook, then Outlook would sync up to the Exchange server. After the initial sync, only changes would sync and this won't take "much" bandwidth unless you make a lot of changes to the contacts.

Syncing would increase each user's mailbox size (by an estimated 200MB for 20,000 average sized contacts), as each user would have a copy of all 20,000 BCM contacts. Unless the server quota is low, this would not be a problem; users waste a lot more space keeping junk mail. However, anyone who uses a smartphone and enables the contact folder for syncing, would have all 20,000 synced to the phone.

On option for sites that have SharePoint, is to link a SharePoint Contacts list to Outlook and set BCM to sync to the SharePoint list. Because only one user would need to sync the BCM Contacts, it would eliminate the need for each BCM user to sync all BCM contacts to their mailbox. The users can access the contacts through SharePoint.

Create a SharePoint Contact app and Connect it to Outlook. 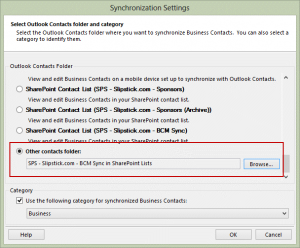 Can you use BCM Contacts in Outlook Web Access? was last modified: February 13th, 2018 by Diane Poremsky

I have a similar situation and want to know if BCM 2010 contact data - Follow-up flags, form specific data, etc. can be synched to a folder on my windows phone and tablet. I also use the online exchange server and outlook.com, but don't know how to configure the programs.

some of the information can be synced, but you need to either use the BCM command to sync with contacts or you need to use a 3rd party utility.

I have tried this but BCM copies the folders into outlook, but then these do not update outlook online. Microsoft support could not get it to work. ... ;-( Pretty poor.