Earlier versions of Outlook had a group calendar window that was separate from Outlook so you could keep a group schedule visible while working in outlook and other applications. The group calendar was changed in Outlook 2010.

Rather than having a separate list of groups that you can display in a scheduler-like window when needed, groups are listed in the navigation pane with all of your calendars. You can collapse the groups to hide the members and check the group to select all, but I feel the old dialog was cleaner. 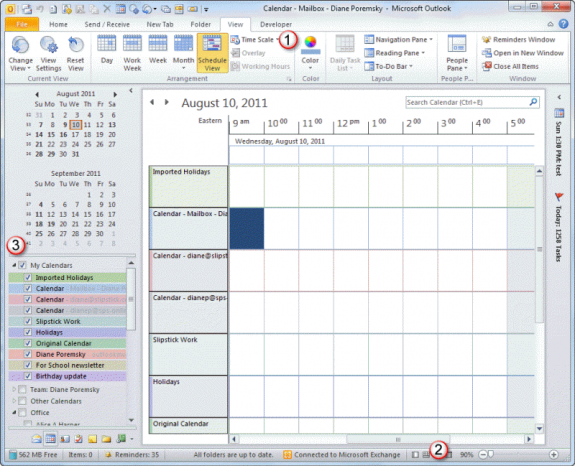 (3) Click the boxes to show groups; use the triangles to show or hide the group members.

You have two options:

Right click on a calendar and choose open in new window, then select the group you want to display. You can close the navigation pane on that window and switch to the new schedule view if desired, but its not nearly as good as the old group schedules.

When you want to view a group, select the checkbox beside the group name to view the calendars in the new horizontal schedule view. Once you've decided on a meeting date, you can easily setup a meeting with the group using the New Meeting with All command. I'm not a big fan of the new group schedule feature.

Now a new issue has come to my attention: you can't share group schedules with other users.

Hi, great stuff. But one question where you may help out: does anyone has an idea how to reduce the zoomlevel of the schedule view bellow 90%? I would like to zoom out to a months range in schedule view.
Is there some VBA code which may help out here?
I only found code for the email preview pane.

Many thanks in advance
Wolf

As far as I know, you can't go below 90% in the calendar pane. If you use multiple monitors you can stretch it across them and see more days, but its less useful with the large time period blocks. I can't get more than a week with the hour scale stretching it over my two monitors.

The Scheduling Assistant in a meeting request can do 50%. If you use a wide screen & hi-res or multiple monitors, you can see more days. (I can get almost a month on a 24" monitor, more when i stretch it across 2 monitors).

I loved the old group format!
There is a way to share the group schedule in 2010. Create a New Meeting with all attendees, don't worry about the date or time. Now save the meeting, but change the file type to a template (.oft). Save it to your desktop or somewhere convient for easy access. You can even insert the file in an email to share. Click on Scheduling Assistant to view everyones schedule.
I use the template just to view all the co-workers in our department at one time. It shows a smaller schedule format then the group calendars, which is too large to see everyone on one screen.