As anyone not living under a rock already knows, Office 2013 SP1 is finally available. However, anyone using a Click-to-Run version of Office 2013 (which is almost everyone) won't receive SP1 for a few more days. Office RT users should receive SP1 about the same time the Click-to-Run version is updated. You can check to see if it's ready to be installed in File, Office Account - the Update Options button will be orange if an update is waiting to be installed.

If you have a Click-to-Run version, you will be prompted to update automatically, about 2 weeks after the MSI is released. The SP1 files available for download (and linked in the KB articles) are used only with the Windows Installer-based (MSI) installation.

When Office 2013 SP1 is installed, the version number will be 15.0.4569.1503. The About Outlook dialog will not mention SP1 (nor will the About dialog any of the other Office applications) 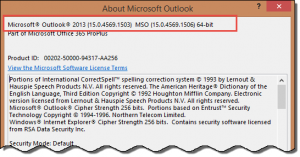 What can you expect to see in Outlook 2013 SP1? I'll start with what you won't see: more themes and colors or improvements in the color(less) scheme. I know a lot of people (myself included) were hoping to see a little more color.

What else is new? SkyDrive is renamed OneDrive and developers will be able to do a little more with the Reading pane compose feature.

A number of calendar bugs that resulted in crashes are fixed. This includes a bug where opening an appointment from the search window crashes Outlook.

Is it stable? I think so. (I've had it for a few weeks.) Does it have any bugs? Sure. Don't all updates include some new bugs? :)

Outlook 2013's Start screen tile is solid blue. This is the result of a March 2013 update installed before SP1. Once SP1 is installed, the icon will reappear.

Can you help me for the above issue in office 2013 outlook.

What type of email account? Did you run scanpst on it (if its a pst)?