This issue is fixed by the following update Description of the Outlook 2013 update: September 26, 2013

One of the Outlook 2013 updates in today's Patch Tuesday release blanked the Navigation pane, as seen in this screenshot: 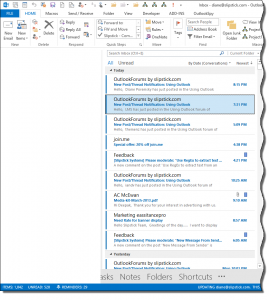 This is the result of mismatched outlook.exe and mso.dll file versions. This causes the minimize button in the Navigation pane to be rendered at a size that is larger than expected. This prevents the navigation pane from displaying.

You are also likely to be missing the Repair function for Office in Add or Remove Programs. This is also the result of mismatched MSO.dll and Outlook.exe versions, however, I don't have a fix for this problem at this time.

To uninstall the update in Windows:

Any idea which update to remove so that the Repair problem will be solved as well ?

No, sorry, I don't. I tried switching out mso.dll too and that did not work (at least without a reboot, which i can't do right now).

Support repro'd the Repair problem, it's related to MSO.dll v.15.0.4517.1504 and Outlook being on a different version. Sheesh. They can't get anything right this month. :)

We had *630 installed multiple times so you need to uninstall it that many times as well. If you don't uninstall all instances of the update you will continue to see the bug.

Thank u kindly. Please note also Repair option is missing for office 2013 within Control Pannel, and removing the specific update doesn't fix that.

If removing *630 doesn't help, try *629 too, but installing the Aug hotfix should fix it every time. I'll check on repair - i still have it on a home premium install.

You can request a hotfix for this problem at https://support.microsoft.com/hotfix/KBHotfix.aspx?kbnum=2817503&kbln=en-us

Limit the number of appointments per day